Well, it’s been over a month since I’ve gotten back to Utah and since then, we’ve been busy conceptualizing and designing our next big project which will potentially be our big thesis project for the next two semesters.

Sadly enough, none of my big ideas made it pass through the pitch phase in which we formed groups and presented them to others, explaining the big idea and innovation behind each game. If interested, give my one-page design docs a read.

Regardless, I’ve found myself in a project where my writing and narrative skills will finally be put to good use. My team of fellow producer James Monty and three engineers (no artist, sadly) were at work on a prototype for an action game based on real-life hostage situations. The player would take four roles in a tense hostage situation: a negotiator, an infiltrator, a sniper and a hacker. 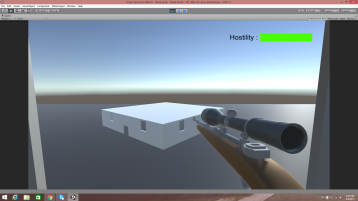 It was a game that had much potential for innovative narrative design since dialogue with the hostage-takers affects the outcome of success. Unfortunately, it did not go over with the audience after our pitch presentation despite all well-intent behind it. To know more, please refer to our Wrap-Kit and my Postmortem in my Video Games section.